[WATCH] ISIS Runs Away During Firefight With Iraqi Security Forces

Marisa Papen is a Belgian nude model who labeled herself ‘free-spirited and wild-hearted expressionist’, was sent to jail after a secret photo shoot in the temple of the complex of Karnak has now appeared naked in most colorful ethnic tribes in Africa. 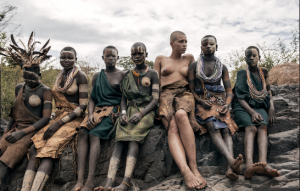 She opens up about her trip to Africa.  According to Daily Mail, Papen said:“They have their own customs and believes, their own beauty-standards, their own religion, living life in harmony with nature and the spirit world.You may say, they are totally different then we are. But to me they are, what we once were. In touch with nature, a part of nature, immensely grateful and respectful towards it.”

Papen and Jesse Walker an Australian photographer traveled to the isolated Omo Valley in south-western Ethiopia. She stayed with Surman tribe for a week.

“What we claim to call beautiful in our Western world isn’t quite the same how the Surma tribe pursues beauty. Both Surma men and woman pierce their ears, some woman stretch their lower lip with a plate. They scar their bodies by making little cuts repetitively. Isn’t it funny we invented all these creams, lasers and other treatments to get rid of ours.” Papen said.

The Surma is known to have a long history of body painting.

She continued: “Not only is it an expression of emotion and art, there’s also a more practical reason behind it. Different colors are used for different rituals, to prevent illness, to attract the opposite sex or to relate to family members or certain animals.”

She did not take the camera out because she wanted the tribe to consider her as part of their community and not as a visitor.

According to Papen: “As intrigued as I was by their appearance, they were [also intrigued] by me. A month before this trip I decided to shave my head. I figured I’d look less like a stranger, having the same haircut as they do. It worked. Until they touched it. The different texture of my millimetred hair compared to theirs entertained them for a full hour, maybe even longer. At that exact moment their pure energy became truly palpable to me. I literally felt vibrations when some of them were rubbing my head. It was pure magic.”

As she observed the cultural differences of the world and Surma, her admiration grew.

“One time I was resting in the shade of a sculptural tree and I was watching two men and a woman from a distance, they were just sitting in the grass, playing with some leaves and collecting some stones. I was trying to go back in my memory and imagine that same exact situation happening in our ‘civilised’ world – I couldn’t.” Papen said.”

Since Surman has their own language, she finds a way to communicate with them.

Papen said: “I communicated with them through sign language and tried to mimic their sounds. It was actually not that hard to understand each other because life is so simple there.”

Surman has a different outlook at nudity which was noted by Papen. She explained that they dress according to the situation. They usually cover their genitals when they are on the big groups but everyone is naked when washing and painting themselves. For protection during hunting or long hike they usually wear a cape. She also admires how Surman has seen breastfeeding as natural that can be done in public. 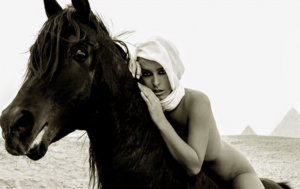 After being caught in having a photo shoot at the temple of Luxor, she was forced to spend the night in the jail of Egypt. She has traveled again to North Africa where they shot at the well-known landmarks of ancient Egypt. They were able to shoot nude pictures at the temple in Egypt after they bribe the young men guarding the temples in Giza. But after they were caught by the Egyptian security guards, Papen and Walker were both arrested. 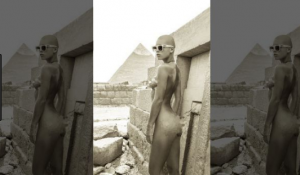 Next President Trump Races Out of N.H. Rally Early To Pay Respects To Two Fallen Heroes That Came Home From Afghanistan